Update Apr. 26: Early this morning, we deployed a server-side fix to resolve lag and latency issues on all servers, as well as an issue causing incorrect SP regeneration. Thank you for your patience.

Update Apr. 24: Edits have been made to this post to clarify some points that may have been misunderstood or miscommunicated. Please look for "(Updated Apr. 24)" mark to find corrected info.

The final update for Project New Leaf is here, and the theme for this month's improvements is "100%". We've taken a hard look at many of the progression systems in MapleStory 2 and focused on guaranteeing improvements to your gear as much as possible, be it through Peachy's Enchantments, getting new Gemstones or unlocking the sockets to slot them in.

A Note on Project New Leaf

Project New Leaf was meant to envision changes to the game by projecting the thoughts and ideas of our players straight to the whiteboard. It's thanks to you all, our community, that we managed to properly address so many of MapleStory 2's pain points. Through the last three months, we've used your feedback to heavily scale back Fairfight, minimize meso sinks, make Epic pets easier to obtain and so much more.

The foundation set by Project New Leaf will define how we move forward: Listening to you, our players, and using your feedback and perspective in order to make MapleStory 2 the best game that it can possibly be. This may be the final update for Project New Leaf, but it is only the beginning of our efforts to fully grasp the potential that this unique MMORPG has, and we look forward to hearing your feedback for the months to come.

MapleStory 2 features two methods of enchanting your gear: Peachy, who offers guaranteed enchantment success at a high price, and Ophelia, who offers a chance of successful enchantment at a lower cost. In the past, however, Ophelia's vastly cheaper enchantment attempts made her the only viable option for most players... but no more! 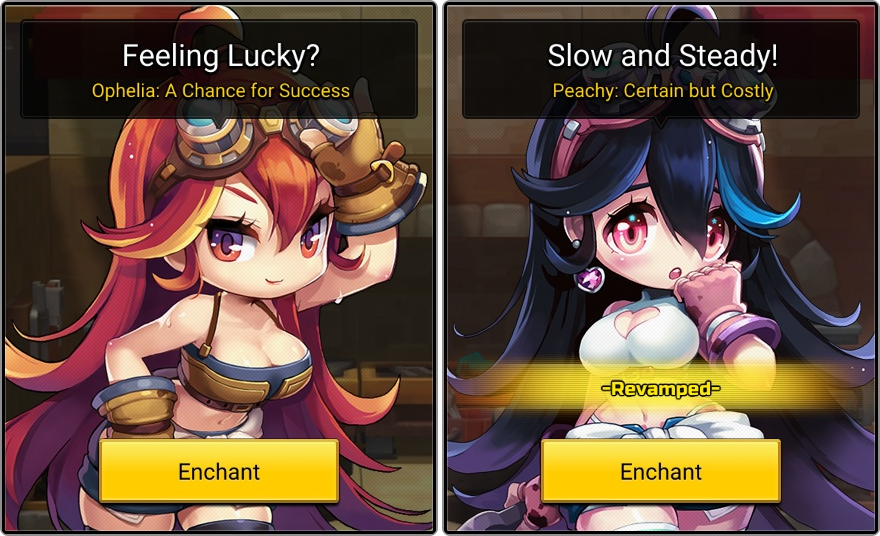 We've gone back to Peachy's Enchantments and rebalanced them for all types of gear, greatly reducing the amount of resources needed to enchant your gear to maximum power. You also won't need to hunt down Crystal Ore to enchant with Peachy, instead she'll use Duplicate Weapons in their stead! All told, you'll end up spending at least 70% fewer Onyx Crystals, Crystal Fragments and Chaos Onyx Crystals to enchant your gear all the way to +15 compared to Peachy's old system.

If you want to check out the full explanation behind the changes, take a peek at the Enchantment Changes Project New Leaf blog.

Before the Progression Improvement Update

After the Progression Improvement Update

Again, these changes are being applied to all enchantable gear. And importantly...

DO NOT THROW AWAY YOUR CRYSTAL ORE!

With our next update, we'll unveil a way to turn all that Crystal Ore you've been saving up into valuable enchantment-related resources that you can use to keep the enchantments going. But for now, it's time to give Peachy some love!

Gemstones are a powerful way to improve your gear... but previously a very costly one, especially once you get towards higher-end Gemstones. Even once you obtained all the materials, you needed to attempt an upgrade with a low chance of success. We've made a lot of changes to the Gemstone systems, making obtaining, upgrading and removing the stones smooth and simple!

To get the best stats possible on your top-tier Accessories, you needed to upgrade your Gemstones... but even going up to Tier 2 only had a 25% chance of success, and it wasn't unknown to make dozens of attempts at upgrading a Gemstone from Tier 9 to Tier 10 and have nothing to show for it, burning through Dust and Crystal Fragments all the while. 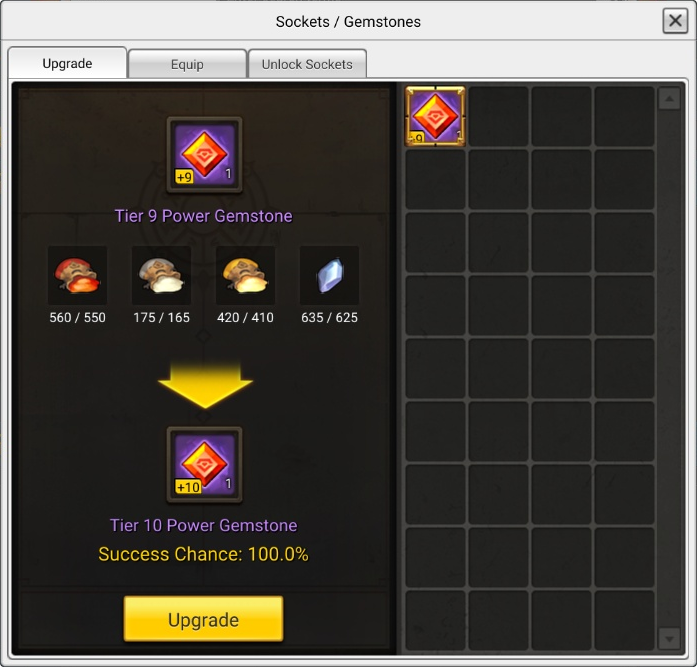 With the Progression Improvement Update, we've decided to do away with the random number generator: Every single Gemstone Upgrade attempt now has a 100% chance of success! This also meant that we needed to rebalance the costs for each upgrade attempt, but don't fret: Gemstone Upgrades now cost ~80% the previous average costs to upgrade!

Combined with all the other changes we're making, it should take 80% less time to get yourself fully loaded up with Tier 10 Gemstones, so get a move on and grab all the Dust and Gemstones you need. And speaking of which...

Before you can even start upgrading the Gemstones, you'll need to gather the materials... which wasn't always a simple proposition. Needing some more Red Gem Dust on your Knight, but only getting the Blue Dust that your Wizard needed was frustrating for many, but that's no longer the case! 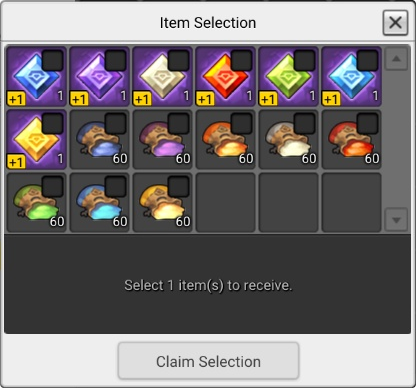 With the Progression Improvement Update, Gemstone Boxes allow you to choose which Gemstone you want, instead of having you suffer the luck of the draw. Similarly, Gem Dust Boxes now let you choose what color of Gem Dust you want! Plus, going forward all Gemstones you get will be account-bound, to make it easier to get the materials you need for those elusive Tier 10 Gemstones!

There is some bad news, however: As a result of this and the improvements we made to upgrading Gemstones, we've elected to remove some sources of Gemstones and Dust:

We believe that the changes outlined above will more than make up for these removals, and you will still be able to obtain Gemstones and Dust in the following places:

The final change to Gemstones is simple and obvious: It really shouldn't cost you that much to remove your Gemstones when you get a brand-new accessory! As such, we've greatly slashed the cost of amount of Crystal Fragments needed to extract your Gemstones to nearly trivial amounts:

If you want the full explanation behind all of the above, you can learn more at the Gemstone Project New Leaf blog. We hope that all of these changes will make it much simpler and easier to slot powerful Gemstones into your unlocked Accessory sockets... and yes, we have some good news there as well!

Even just opening the sockets for your Gemstones had a chance of failure before and, to go along with all of the other changes, we've kicked out the RNG and adjusted the costs to compensate! It now will cost you a bit less now on average to unlock all three sockets, and you won't have to worry about a string of awful luck gobbling up your Crystal Fragments!

Find out more about the reasons behind these changes in the Accessory Project New Leaf blog.

With this update, we felt it was important to reward play fully and equally, without trying to force players into too many activities that they had no interest in. One of the biggest culprits was Daily Missions, an excellent way to get the items and currency you needed to upgrade your equipment, but required you to do many tasks that many found uninteresting.

As such, we are removing Daily Missions in favor of a new, innovative strategy: Play how you want! Any activity in MapleStory 2 that provides experience also, once you hit Lv. 50, rewards Prestige Experience that increases your Prestige Rank. With the Progression Improvement Update, hitting those new Prestige Ranks will also come with a bonus prize for the first, second and fourth time you do so each week!

These Prestige Rank Reward Boxes contain the critical resources and currencies that made up the bulk of the Daily Mission rewards. While some special rewards from Daily Missions, such as Hairstyle Voucher and UGC Template Fragments, will not be in these new boxes, keep an eye out for them to show up in special events!

We're aware that mesos were a popular reward from the Daily Missions as well. To compensate for their loss, we're boosting the meso rewards from Normal and Hard Adventure Bonus Boxes by nearly double!

You can learn more about the purpose behind these changes at the Daily Missions and Prestige Rank Project New Leaf blog.

Thank you for bearing with us throughout Project New Leaf! This is by no means the end of our efforts to improve MapleStory 2 and make it the best experience it could possibly be, but your help in telling us what needed improvement and where our changes were falling short have been a huge boon. Keep enjoying MapleStory 2, and we'll keep making it even better!

Get back at some finger-snapping baddie with this month's special sales! Rocket on the ground or into the sky with the new Super Mechacar and Super Mechaplane mounts, show off like a marvelous captain with a new set of heroic emotes, work out some other terrible superhero puns while cuddling with a new set of cat-themed housing decorations and more!

Get all of the info in the Retributors Sales post!

The Performance Improvement Update is here with a big event full of activities all across Maple World, double drops in Chaos Raids and a special gift for joining us on the first day after the patch!